Industrial Mineral deposits are known to exist in Heavy Metal (HM) concentrations within the projects to be mined. From known information indicated to date for projected deposits, percentages of Titanium minerals vary from as high as 14% Ilmenite and 2.3% Rutile; along with other deposits: 5%Garnet, 3% Zirconia Sands, and 40% Magnetite iron. Rare earths also potentially exist; namely, Monazite and Bastnasite. The OZ107-133 deposit which connects to OZ101-132 deposit has the greater potential deposits.

Monazite may be up to 4.9% to 5.6%, however, the Company has yet to define the occurrence and quantity to mass if it persists by element per density of populations yet to be carried out. Likewise with the Bastnasite and either elements may be discounted completely where the effort doesn’t warrant it. By contrast though the stronger occurrences are where the tectonic region in contact with the metamorphic and basaltic Campaspe beds display higher oxidations in profile of erosion further along the structures planned to be mined.

While the outline above is significant, the Company does not confirm any Inferred, Indicated or Measured Industrial Mineral endowment, however pronounced it is, as the Industrial Mineral content has yet to be properly quantified. Although the commercial viability of mining these deposits has yet to be ascertained, the Company has plans to ultimately produce a synthetic Rutile from the massive amount of Ilmenite, both at the OZ101-132 site and at the adjoining OZ107-133 site.

Following the Gold mine development at OZ101-132 further exploration and analysis of metallurgical data will be undertaken to better qualify the additional mineral resources. During Gold production all Industrial Minerals will be sent to storage facilities for downstream processing once the minerals are quantified. The process of separation is not an issue as the production and processing circuit has to separate a primary concentrate in any case hence, the minerals will become concentrated in the circuit in any event as they must be separated during Gold concentration and before discharge.

This means the Company has the option to discharge it to waste or to store it. The obvious will be to store it while research exploration and analysis defines best commercial usages. However, thus far there exists an appropriate amount of Industrial Minerals within the deposits. More particularly the resource at OZ101-132 is expected to also increase with further exploration as 10,332,286 m3 (16,531,658t) doesn’t include all resources yet to be assessed. At the above expectations, Industrial Mineral content for future development is quite large. 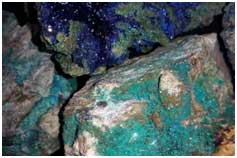