The mine has a 1980s production history of 56 troy ounces of Gold per day, processing on average some 68m³ of ore per hour. Palaeo deep leads are frequently prevalent in the project district containing 1.3 to 3 ounces of Gold per m³ from both alluvial and eluvial deposits.

Pursuant to compliancy under CIM NI 43-101 Section 2.3 (2) and 2.3 (3), Measured, Indicated and Inferred Resources are used in the assessment projections using general good practices in the evolutionary process of exploration and development. This in no way infers total completion of the project in its present form, as parameters may change and capacities may increase along with grade or dilute with mass and or grade as the project develops. The assessment is used to validate and understand the levels of operations in the Gold resources of this project. The primary focus of the Company is on specific geological Paleo occurrences containing ancient buried or elusive, hidden massive bulk alluvial Gold and industrial mineral deposits. This Gold mine represents a primary start-up activity with respect to this type of rich environment relative to the strategic objectives of the larger adjacent prospect of the Company, at Project No OZ107-133. 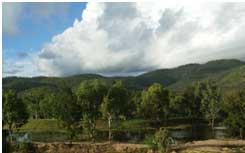